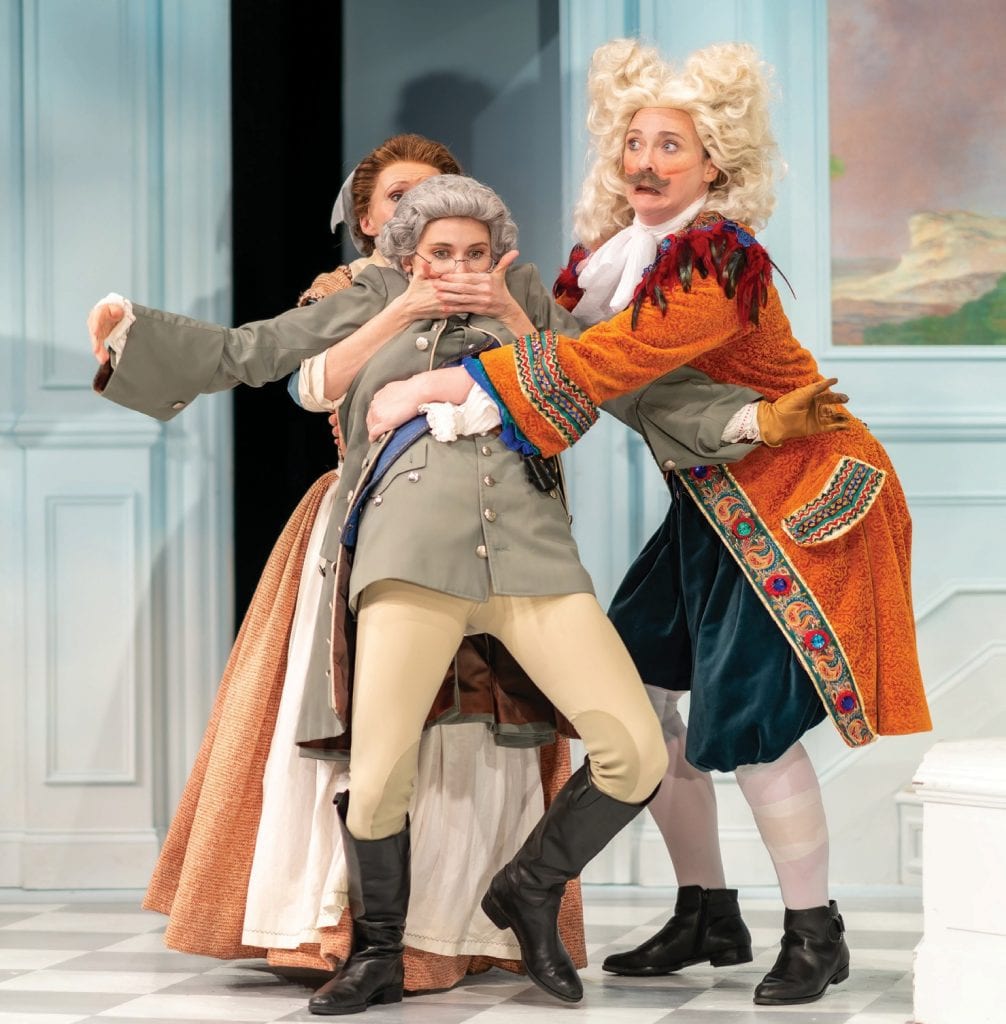 This lady demands satisfaction — as we all should when we attend the theater — and I certainly found it at Gulfshore Playhouse’s superlative production of “The Lady Demands Satisfaction.”

This delightfully silly spoof by Arthur M. Jolly is a Florida premiere; the theater discovered it among the submissions for its New Works Festival. Unfortunately, by the time it was chosen, it had already been staged elsewhere (by Chicago’s Babes With Blades Theatre Company), disqualifying it for the local festival.

But then something better happened: Gulfshore Playhouse decided to stage a full production of the show.

I’m so glad it did because now, instead of just a staged reading, we get the pleasure of a full set, lighting, fabulous costumes and cleverly choreographed dances and swordfights.

The deceptively simple set by Edward T. Morris is luscious: When we step into the performance space we’re greeted with an empty room bathed in blue light. The room has a door on each side and a set of French doors up two steps, centerstage. 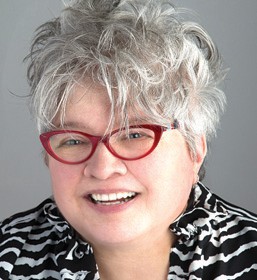 The combination of Mr. Morris’s set and Jimmy Lawlor’s adventurous lighting is a perfect marriage and a cause for delight all evening. The lighting shifts from scene to scene with an almost discotheque intensity. (At one point the backdrop through the French doors glows electric-green, while the interior walls are awash in a neon purple-ish pink.)

The play’s incidental music — recordings by the Vitamin String Quartet — is a wonderful mixture of contrasts: covers of songs such as “Royals,” “Chandelier,” “Hungry Like a Wolf” and “Uptown Funk.”

The characters, dressed in lace and buttons and buckles and bows as is appropriate for 1766 Britain, make their entrances boogieing to this modern-yet-old-sounding music. Then they watch an off-stage sword fight.

Though the first sword fight in “The Lady Demands Satisfaction” takes place offstage, don’t worry — there are plenty others sprinkled throughout the play. But none like I’ve ever seen before. One fought in the pitch dark (though we as an audience can see it clearly), another is fought with swords and food, including a roast pig, and in yet another, both duelers are trying deliberately to lose, though neither realizes it.

Mr. Jolly’s tongue is firmly in cheek throughout the entire play. When a maid takes a long time to answer the pounding at the door in the middle of the night, she’s asked, “Were you abed?”

Lord Abernathy (Paul Carlin) has arrived to inform Trothe (Betsy Hogg) that her father has been murdered while in the midst of a sword fight. (Another assailant darted out and stabbed him in the back with a dagger while he was fighting.)

But Lord Abernathy uses so many euphemisms and such flowery language that the innocent Trothe, who is 15-goingon 16 and admittedly somewhat dim-witted, doesn’t understand her father is dead.

Because of an agreement her father signed, the young Trothe has to either marry someone proficient with the sword or learn how to fight, within a week. Anyone can now challenge the girl to a duel and, upon winning, claim ownership of the Pepperston Manor House and its grounds.

Then Aunt Theodosia (Amy Blackman) shows up. She’s such an excellent fighter she wins even when dueling men. She favors britches instead of fancy dresses and the paniers that add volume to the hips. She’s self-sufficient, thank you very much.

When Lord Abernathy questions how Theodosia can do what she does, why her “weak, female brain didn’t overheat,” she retorts that she “wore a cooling hat.” She has no time for his nonsense — nor anyone else’s.

Mr. Carlin plays Lord Abernathy as a pontificating fool who has no clue what he’s talking about. He loves to mansplain. At one point he tells a character, “I know what you think you feel, but you’re wrong.”

Trothe is in love with the fey young Osric (Evan Sibley), who keeps collecting the handkerchiefs she lets flutter to the ground in a flirtatious gesture.

Thanks to costume designer Kirche Leigh Zeile, Ostric’s outfit is even more outrageous: lace at the wrists and neck, a foot-high powdered wig as pink as cotton candy, a flowered pattern on his vest and huge pink feathers on his shoes. Then there are the beauty marks: one in the shape of a star, the other in the shape of a heart.

Everyone involved in this play seems to have had great fun pushing everything from sufficient to more: more outrageous, more audacious, more over-the-top.

Director Jeffrey Binder understands the various forms of the show’s humor — word play, verbal misunderstandings, disguises, physical humor — and accelerates it all while also wrapping it up in pretty, glittery paper.

“The Lady Demands Satisfaction” is as much a visual spectacle as it is cleverly written. It’s Mr. Binder who added the music and dance (choreography by Amy McCleary) to the play.

Emily Cramer as Tilly and Tarah Flanagan as Penelope, the much put-upon maids, play essential roles, plotting to save their mistress and also, their jobs. Not only do they have to put up with Trothe’s little teenage temper tantrums, but one of them has to pretend to be a Prussian master sword fighter.

Of course, the real Prussian (Rebecca Brinkley) shows up, causing much confusion.

This is a gender-bending tale of deceit, betrayal, mistaken identity and fighting for one’s honor — and homestead.

It’s a fine example of ensemble acting with everyone putting in a compelling performance. The humor is so finely tuned, you’d think you’re watching a comedy troupe that’s been together for years.

If you don’t care for farce, you might not appreciate what “The Lady Demands Satisfaction” has to offer. But it’s one of the best examples of the genre I’ve seen onstage; it had me laughing continuously.

It’s may not be serious, but it certainly is smart.

And it satisfies in the way that only theater magic can. ¦