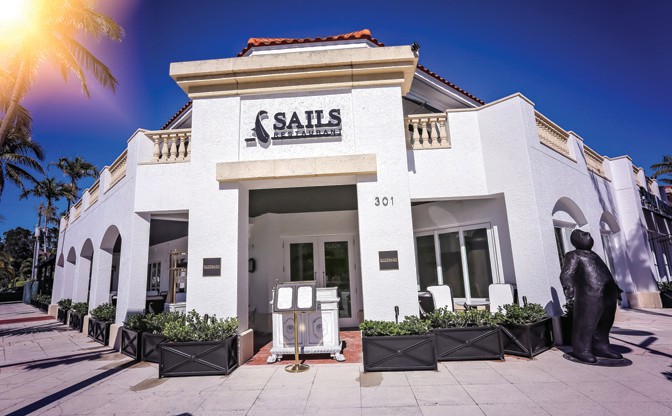 The building that now houses Sails Restaurant is one of many Naples-based holdings in the Hoffmann family portfolio. COURTESY PHOTO of Samantha Bloom of Oh Snap Media

A few times a week, Bruce Barone Jr. looks out his office window on the 600 block of Fifth Avenue South in Naples and spies a couple taking a photo next to the statue out front.

The bronze sculpture is of a man wearing a suit, looking down at the bottom of his shoe, likely at something unpleasant. The piece, “It Happens,” is by Jim Rennert of Salt Lake City, Utah.

“We’re talking about visual layers,” said Mr. Barone, CEO of the Fifth Avenue South Business Improvement District. “The BID is bringing these gorgeous hanging baskets, the city is cultivating the landscaping on the street, and the Hoffmanns are bringing the sculpture.”

Priced at $85,000 at The Englishman Fine Art, along the 300 block of Fifth Avenue, the sculpture was purchased and placed on the street by Hoffmann Commercial Real Estate, the city’s number one landlord.

David Hoffmann and his son, Greg Hoffmann, have been buying up property along Fifth Avenue South and Third Street South for a few years. 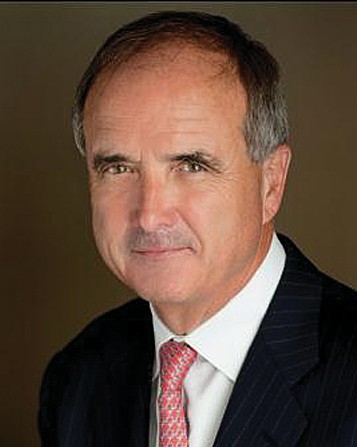 It began with the purchase of seven properties and a parking lot in 2015, for a total of about $75 million.

As of June, they owned 28 buildings with four more under contract for nearly half a billion dollars.

“So we’ll be north of 30 (buildings),” Greg Hoffmann said, referring to a goal the duo set for the end of the year. Mr. Hoffmann is principal and chief executive officer of Hoffmann Commercial Real Estate. His father founded the parent company, St. Louis-based Osprey Capital, in 2002. Osprey owns 200 locations across the United States and 27 countries.

The father-son team set its sights on Naples after vacationing here as a family over the years, and selected it as an investment opportunity the same way they chose others.

“The timing was right,” Mr. Hoffman said. “It was the right place and the right time and from there we’ve been able to grow to the size we are today.” 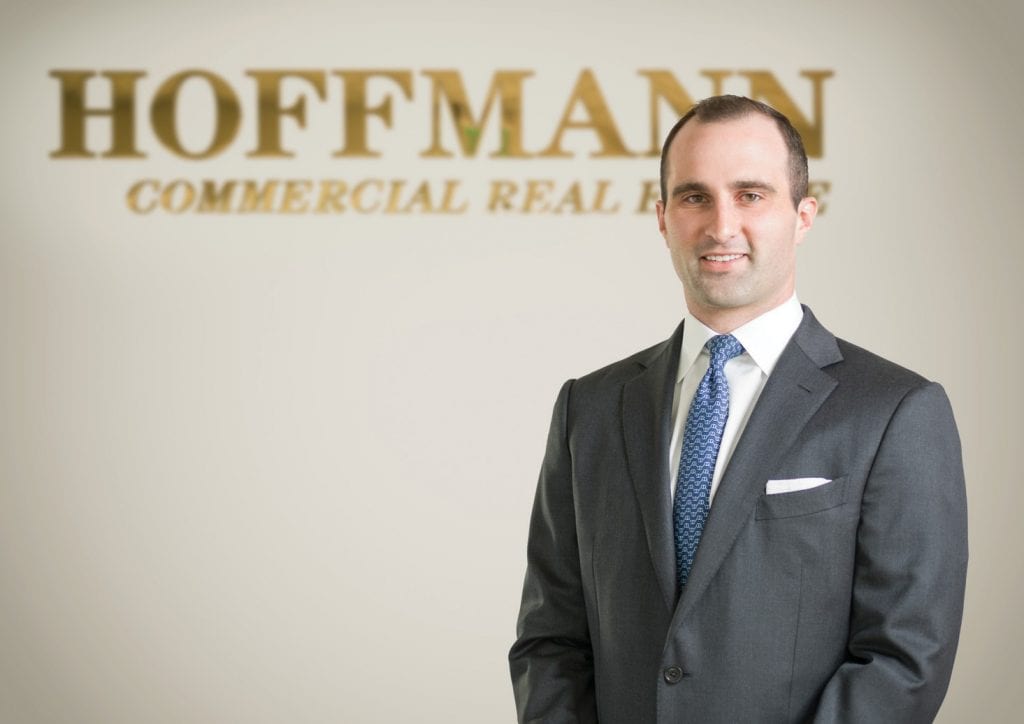 Greg Hoffmann is principal and COO of Osprey Capital, one of the largest private family offices in the world. COURTESY PHOTO

That size is formidable, but any fears residents or business owners had when they began snapping up property years ago has nearly dissipated as the Hoffmanns have refurbished old facades and fixed up aging structures.

“You know, there’s many people that say ‘Oh my gosh, what are they doing? Can you stop them?’” said Naples Mayor Bill Barnett. “And I just kind of laugh and smile and say, look, they’re investors, plain and simple, and they fell in love with Naples.”

Mr. Hoffmann said the real estate company has not seen any longstanding downtown tenants leave their post because of a rent increase after they purchased the property, something Mr. Barone confirms. And while they’ve implemented some rent increases, tenants seem to see the value in what they’ve done to the properties in the meantime: repairing asphalt, replacing awnings and improving lighting and infrastructure.

“It doesn’t do them any good to price somebody out,” Mayor Barnett said. “And I think they’ll tell you the same thing. There is no ulterior motive. It’s not going to be Hoffmannville instead of Naples.” 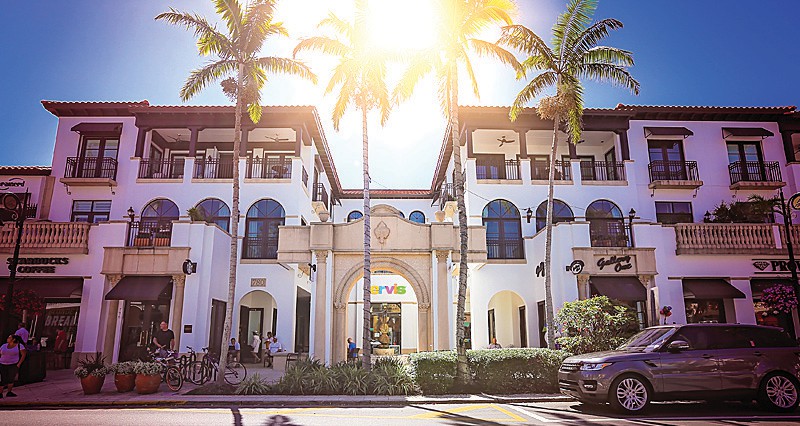 This building is one of many lining Fifth Avenue that you might find bearing the Hoffmann Commercial Real Estate bronze plaque. The family has recently transitioned its strategy investing in buildings to successful Naples companies. COURTESY PHOTO of Samantha Bloom of Oh Snap Media

Tom McCarthy, owner of The Englishman Fine Art, said he’s been awed by the changes downtown.

“I’ve been genuinely impressed with (the Hoffmanns) not only talking the talk but walking the walk,” he said.

He’s known David Hoffmann since 2000 when he operated an art gallery in Vail, Colo. The recession forced Mr. McCarthy to close that gallery; he’s been in Naples for 15 years. When the Hoffmanns visited again a few years ago, they convinced Mr. McCarthy to relocate his gallery from Third Street South to a newly redesigned space on Fifth Avenue South. The Hoffmanns purchased the current location for the gallery in 2015 for $11.8 million.

Mr. McCarthy made the move and was able to display sculptures outside on the street to draw customers in where 7-foot sculptures fit easily under the ceilings. But it’s not just the fancy new facade that convinced Mr. McCarthy to relocate.

“In my history of doing business in the U.S., landlords are usually very distant people who want to try to get as much rent for as little maintenance as possible and you hardly ever meet them. Certainly in Naples I never met our previous landlord. I met their agent,” Mr. McCarthy said. “It’s very uplifting having someone we can deal with, with the knowledge that they respect your business and they’re enthusiastic about it doing well.”

The sculptures the Hoffmanns purchased from Mr. McCarthy and placed along Fifth Avenue are just icing on the cake for folks like Mayor Barnett and Mr. Barone, who want to continue to enhance the street and its offerings.

And when the Hoffmanns heard about the perceived parking problem on Fifth Avenue, they stepped in with a free daytime valet service, making it easier for patrons to walk the street without driving around, hunting for a space.

“The goal is just to enhance the customer experience,” Mr. Hoffmann said.

Next, the Hoffmanns are looking to hand out parking maps to visitors who might not be familiar with the area.

“That’s an obvious help to our community, to Fifth Avenue, our restaurants and merchants,” Mr. Barone said. “Plus the facilitation of many different parking spots that were private and now the Hoffmanns have made available.”

David Hoffmann lives in Naples full-time with his wife, Jerri Hoffmann, who serves on the board of the Fifth Avenue BID. Mr. Barone said through working with her, he has seen how much she and the family love Naples. Greg Hoffmann lives in Chicago and visits regularly.

Mayor Barnett said having the Hoffmanns in town where they have gotten involved with local charities, including the Naples Winter Wine Festival, has been a lot like having Tom Golisano move from New York to Naples.

“Well, the Hoffmanns have never made any bones with the fact that they really fell in love with Naples and want to see it succeed,” Mayor Barnett said.

The latest trend for Hoffmann Commerical Real Estate has been the purchasing of companies. Mr. Hoffmann said they’re looking for thriving fixtures that have stood the test of time in Naples.

“These are properties and companies we have no intentions of selling in the future,” Mr. Hoffmann said. “Hopefully these are things that get passed down in estates. We call them generational assets.”

And because of that, the Hoffmanns say they have no plans to drastically change company leadership or practices.

To date, the Hoffmanns have also purchased Sunmaster of Naples, specializing in awnings; Adelheidi’s Organic Sweets on Fifth Avenue; Signcraft Signs & Things, established in 1978; and The Bevy restaurant off Third Street.

Mr. Hoffmann said he and his father have their eyes open for a bowling alley tenant or an upscale movie theater that might be looking to expand into the downtown area. So while they aren’t in the business of starting companies, they do want to look for opportunities to foster the types of companies they feel would add to the downtown vibe.

“I just love the look and feel of Naples all around,” Mr. Hoffmann said. “We certainly don’t want to take credit for what’s happening downtown. The reputation was there before us and is way bigger than the Hoffmanns. We just want to smooth out the wheel, make it a little better and add something interesting.”

More From Top News Go To The Top News Section