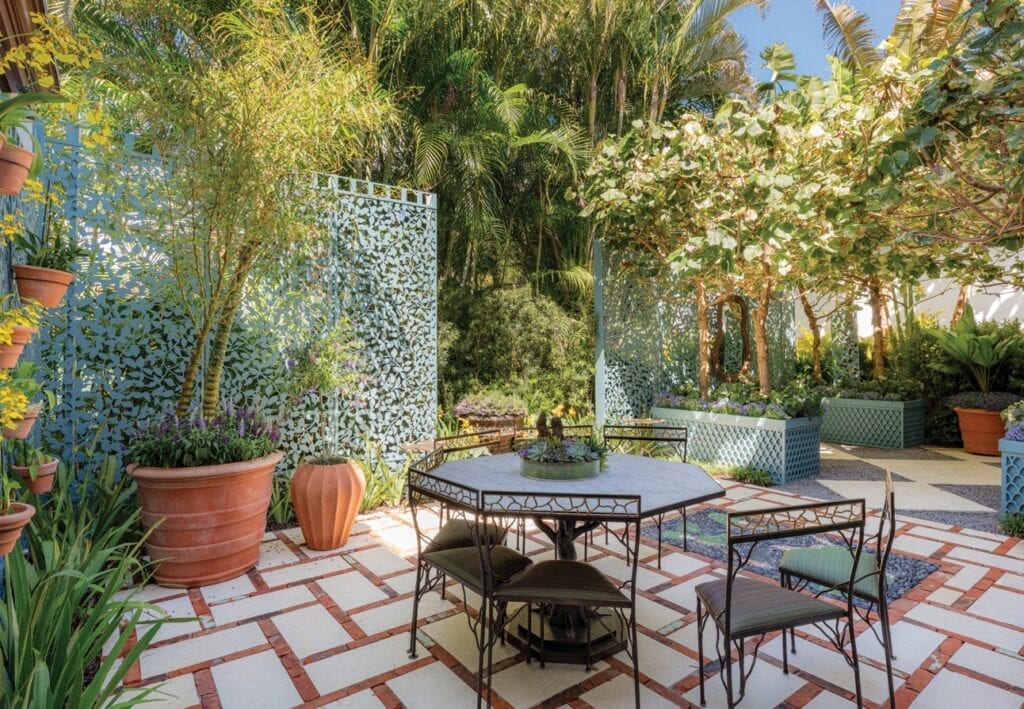 IF MERELY TO SOAK IN THE SWEEPING VIEW OF the Intracoastal Waterway from several of its 18 rooms, the Kips Bay Decorator Show House Palm Beach is worth the trip. Twenty designers from across the country have imprinted their individual aesthetics on the magnificent Mediterranean villa in West Palm Beach for the fourth annual fundraiser that runs through May 9.

The show house typically receives international attention — this year’s, in a time of pandemic, should be no exception.

“Our goal is to continually build on the success of each year’s show houses — constantly raising the bar — and this year we’re thrilled to secure a beautiful location that will play home to the talents of a new set of renowned designers,” James Druckman, president of the Kips Bay Boys & Girls Club, said in a news release.

The event benefits not only the Kips Bay Boys & Girls Club in New York City but also the Boys & Girls Clubs of Palm Beach County. The opulent abode is open to the public for both in-person and virtual tours of its five bedrooms, six bathrooms and various hallways, nooks, vestibules and luxurious living spaces as well as the courtyard garden and pool terrace. 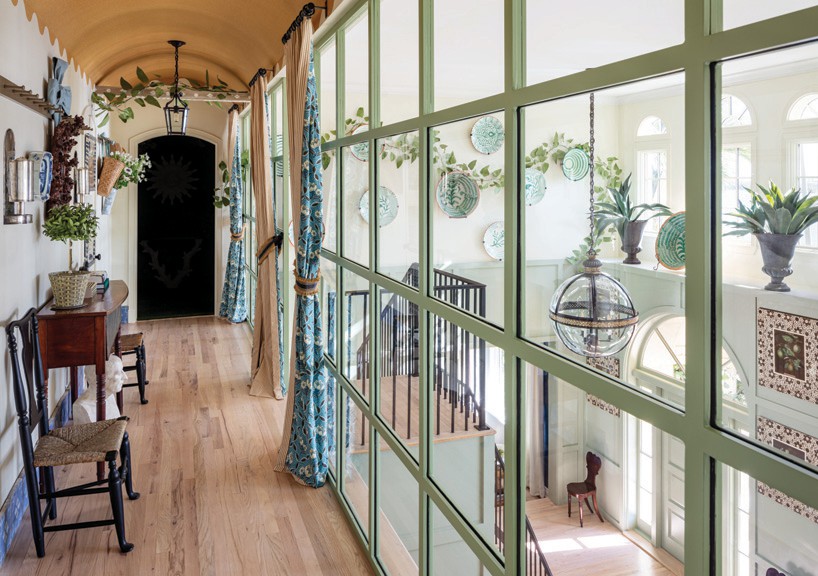 “Events like the show house allow our clubs to continue our mission to help as many young people as possible,” Robert Dunkin, chairman of the Boys & Girls Clubs of Palm Beach County, said in the news release.

Upon entering the front door, guests will find themselves in a large foyer decorated with hanging Mexican pottery entwined with papier-mâché leaves and anchored by a grand staircase leading to an architectural vitrine. Encased behind the patina-enclosed panes of the glass and metal structure is a hallway, off which four bedrooms lie. There are peg boards for hanging coats and hats, chairs for gazing out at the wide water and assorted accessories that tie the “Colonial Hothouse” theme together.

“We wanted to create another room and a place for all these people staying in all these bedrooms to congregate and meet,” said Charles Peed, co-proprietor of West Palm Beach-based Casa Gusto. 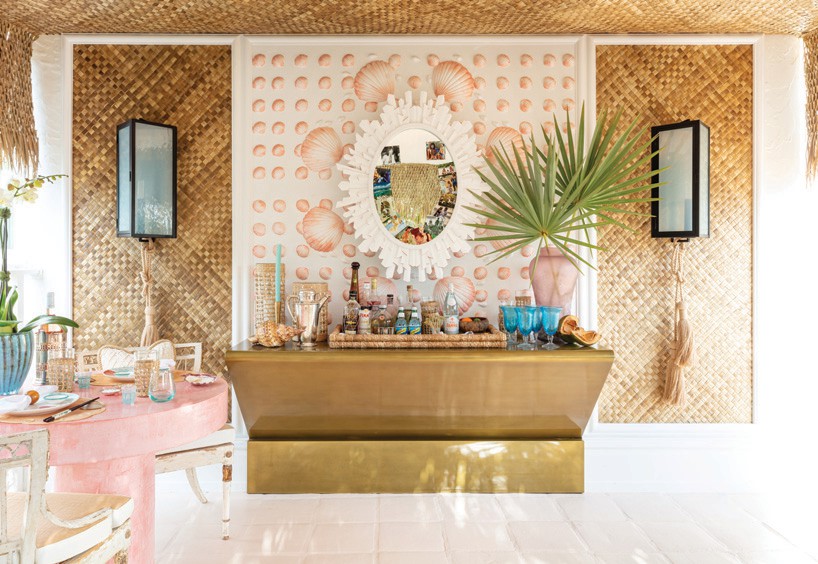 Added Cris Briger, also co-proprietor of the firm and Mr. Peed’s mother, “It’s like a room instead of a balcony. It just works. It’s cozy.”

In what could be considered best of show, “Beyond Eden” is an otherwise basic bedroom that has been transformed into a South Florida oasis overgrown with passionflowers, fuchsia and ylang-ylang — all depicted on handpainted wallpaper. The botanical boudoir is dimmed by laser-cut window shutters that cast raindrop-size beads of sunlight onto the grass rug.

“You feel like you’re under the trees because there’s all this speckled light,” said Cece Bowman, of Palm Beachbased Kemble Interiors.

Buzzing bumble bees adorn the whimsical wall of the vestibule leading to the bedroom.

“That’s the queen,” Ms. Bowman said, pointing to the flying insect with the pink hat. “She is showing you the way to the secret garden.”

Opposite “Beyond Eden” is “Interlude in Indigo,” a tropical bathroom designed around a striking blue tub beneath an oversize gold chandelier. Imagined by Alexandra Naranjo, of Canada-based Alexandra Naranjo Interior Design, who also worked on the adjoining walk-in closet, the guest bath takes one into the thick of a rainforest. The guest closet, “Asian Enchantment,” puts one in the heart of the Far East.

Nina Magon’s “Contessa’s Bedroom” is an impossibly small sleeping quarters that looks remarkably big due to some subtle juxtapositions and a few tactical touches.

“Our challenge was how to design this architecturally and make it seem larger than it is,” said Ms. Magon, of Texas-based Nina Magon Studio.

The bed rests low to the ground on an illuminated stone frame. Above, the curved ceiling and metallic ombre walls create the illusion of height. Two half-moon-shaped mirrors capture the effect and create depth. 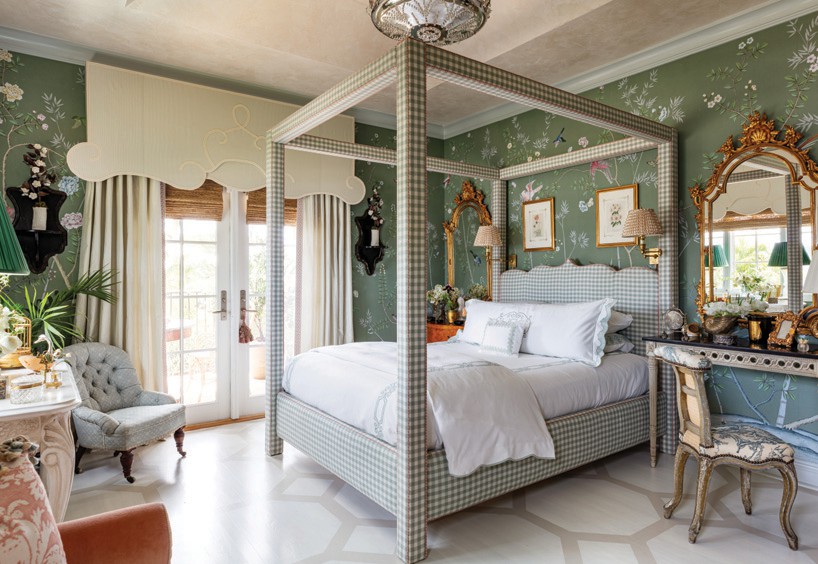 Another upstairs room called “The Sunny Spot” is a bright and playful seating area with an abundance of artwork, curious objects and fluffy pillows.

“It’s for making your phone calls, it’s for reading your magazines and being away from the hubbub,” said Mally Skok, of Massachusetts-based Mally Skok Design. “It’s a little refuge.”

In what also could be considered best of show, Ellen Kavanaugh’s “Bar Mustique” is an ode to the private Caribbean island in Saint Vincent and the Grenadines. Dramatically shaded by a heavy thatched hut, the multilevel veranda is awash in coconuts, conch shells and palm fronds. It offers cushioned lounging in linens and silks and a beautifully set table for two. A bold brass bar is stocked with rum and other top-shelf spirits.

Also upstairs is Amy Morris’ “Coastal Retreat” — a bedroom and a bathroom — and Anna Braund’s “The Loggia” — a captivating perch overlooking the neighborhood. 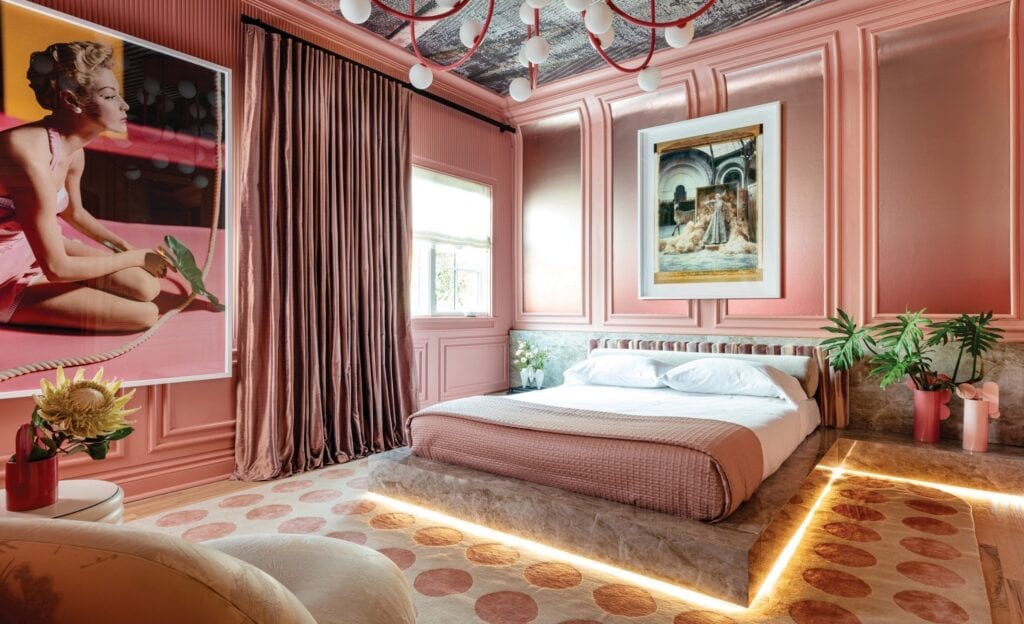 Downstairs, the floorplan is as design-savvy as the second floor, with more of a masculine mood. Exemplifying that is Mikel Welch’s family room, featuring a long slab of a coffee table, a chunky sideboard and a large painted canvas – each entirely black and seemingly pre-evolutionary.

“My idea was, what if we took Fred Flintstone and dropped him here in 2021,” said Mr. Welch, of New Yorkbased Mikel Welch Designs. “What would he do?”

Complementing the primitive pieces is furniture from his personal line, including a pair of signature cradle chairs. 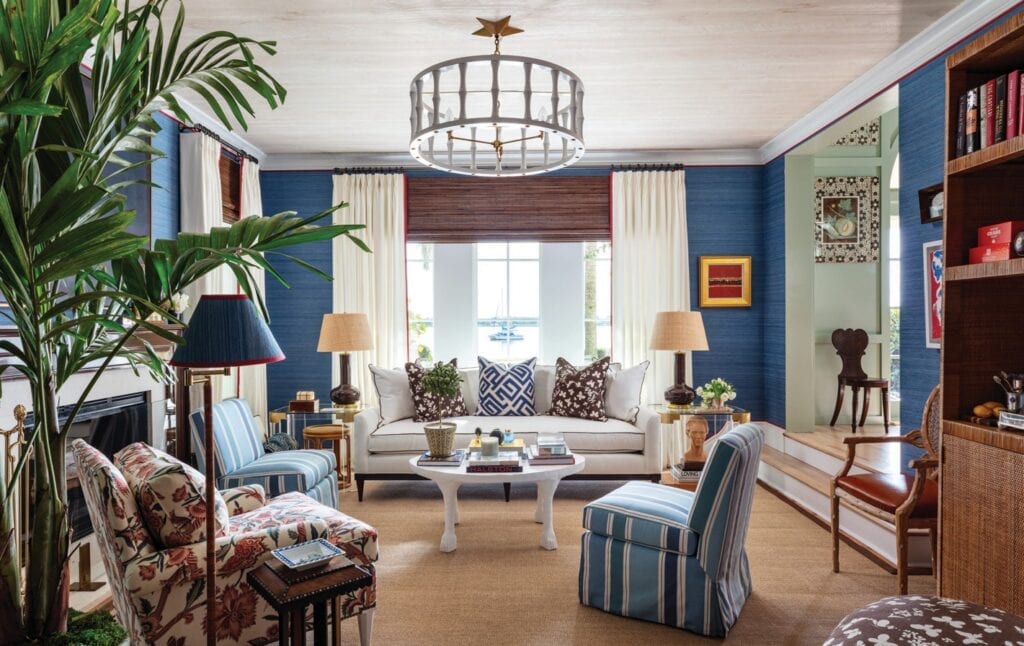 “Parlour Games” has a generously appointed bar complete with candy and snacks meant to be enjoyed while playing backgammon, cards or perhaps a round of charades.

“Living rooms used to be for formal occasions,” Ms. Deaton said. “My buddies and I go to the living room after dinner now and hang out.”

The “Menagerie Dining Room” and its hand-knotted rug with 174 colorways is Lorna Gross’ creation. The kitchen and breakfast nook received a muchneed makeover by Mark Williams and Niki Papadopoulos. Lisa Hynes and Heather Weisz, of Wellington-based HW Interiors, had the interesting job of providing pizzazz to the pantry and laundry room — and they did — while Georgia-based Forbes + Masters turned a powder room into a Puerto Rican retreat. 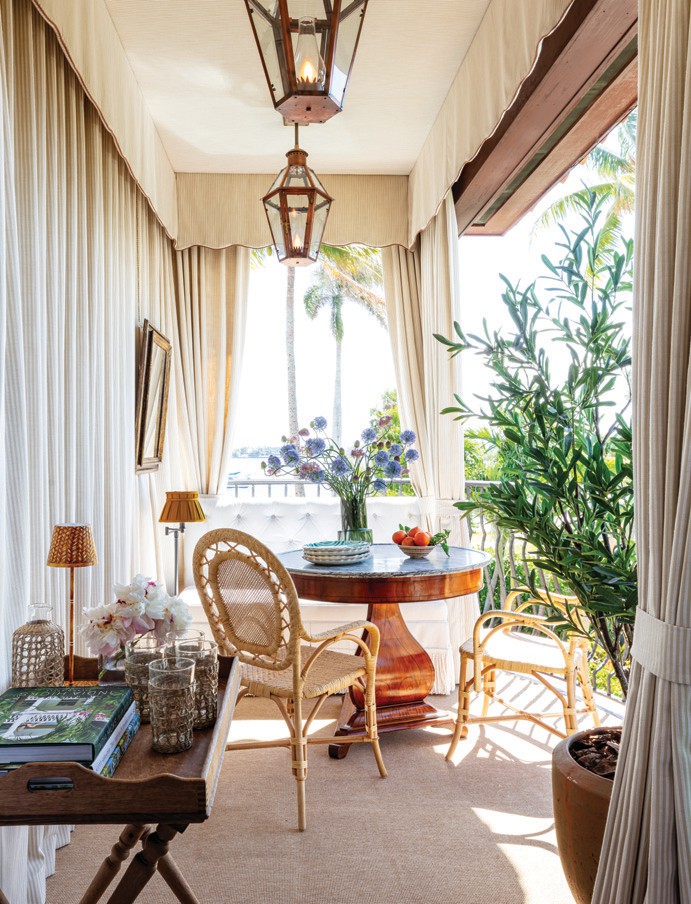 The courtyard garden in the rear of the property, enveloped by intricate latticework, contains a French jardinière bursting with blooms and a floor mosaic that looks like a koi pond. On one section of the latticework dangle 13 petite pots filled with oncidiums, or “dancing lady,” orchids. The space is accessible via the dining room or the kitchen.

“The idea was to make the inside and outside feel as one rather than just stepping out into a totally separate area,” said Claudia Visconti, of Palm Beach-based SMI Landscape Architecture. “It is a nice place to escape and be outdoors.” ¦